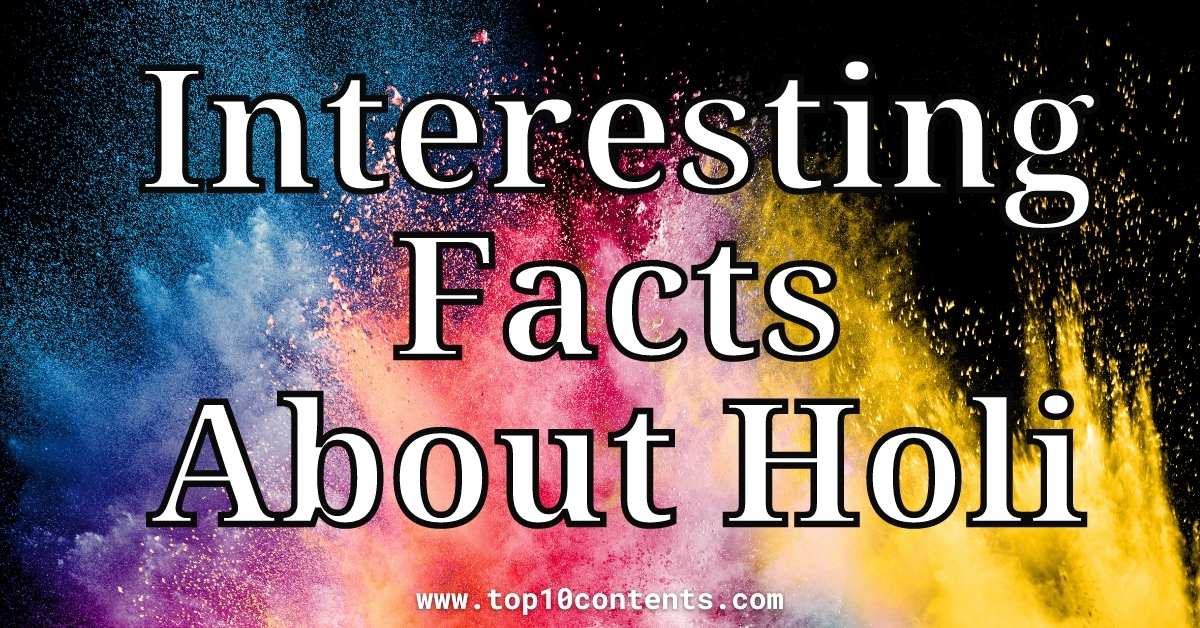 Holi 2021: Holi is one of the biggest festivals of Hindus and India, which is celebrated with great pomp in India, Nepal, and other parts of the world (where Indians and Hindus are living today.). The festival, which arrives in Vasant Ritu, is known as the “Festival of Happiness” and “Festival of Love“. The festival of Holi is known as a symbol of “Victory of good over evil“. In this article, today, you will know “10 Interesting Facts About Holi“.

#1. The festival of Holi falls in Vasant Ritu (Spring) in India and the festival falls on the Full Moon of Phalgun Mas according to the Hindu calendar. It is also called Phalguni due to the falling on Phalgun Mas. The main reason for celebrating this festival is to send a message to people that good always triumphs and evil always loses. Meaning “the victory of good over evil“.

#2. According to Hindu Mythology, this festival is celebrated because “God protects his devotee.“. A long time ago, the devotee Prahlada used to worship Lord Vishnu of the Hindus. His father Devil Hiranyakashyap did not like this, because he considered himself almighty. Even after trying hard, he could not convince his son to worship him, so he asked his sister Holika to take him in her lap and sit in the fire so that Prahlada would die. But the opposite happened because Holika herself was burnt but the devotee Prahlad survived. Hence “Holika Dahan” is celebrated every year and it is the time of the first evening of Holi.

#3. During Holika Dahan, people gather at one place and burn Holika, and sing many Holi songs. Also, they eat different types of dishes during Holika Dahan. Holika Dahan is performed in the evening on the first day of Holi and on this day people pray to God to forgive them of all their sins.

#4. There is also an ancient story related to Holi that once Raja Kans sent a demonic Putna to kill his nephew “Lord Shree Krishna“. Putna wanted to kill Baby Krishna with her Poisonous Breast Milk but she was later killed and once again the good wins over evil. Krishna survived by drinking poisonous milk but his color turned blue. But he was very much in love with Radha, and it was Radha who was fair-skin, due to which Shri Krishna sprinkled Gulal on Radha and conveyed that Holi is a festival where neither color is seen nor beauty, on this day everyone becomes of one color.

#5. The first day is known as Holika Dahan or Chhoti Holi and the second day is Rangwali Holi, Dhuleti, Dhulandi, or Dhulivandan.

#6. On the day of Holi, people embrace each other and go to each other’s house to greet Holi and eat food. People color full to their little ones with Gulal and place a Tika on their forehead the elders with Gulal.

#7. Holi is mainly a children’s favorite festival. A few days before the arrival of Holi, children start playing with Gulal and many children also Fight with Water Guns (Pichakari). If you are looking for buying some Auto-Filled water Balloons in India, checkout.

#8. There is a popular saying, which is said every time on the day of Holi that “Bura Na Mano Holi Hai.”, “Don’t worry, it’s Holi.” This saying is said when someone suddenly colors you with Gulal.

#9. Thandai (Drinks) is used a lot during Holi. People drink Chaas, lassi, etc. in Thandai while playing Holi. Along with the Thandai, people also consume Bhaang, which makes people intoxicated and they play Holi in a very drunken mood. But consuming Bhaang in large amounts is also harmful.

#10. Holi is a festival of brotherhood. People play Holi leaving religion, color apart. Holi gives a message of solidarity to the world. Happy Holi to you!

I hope you liked these top 10 Interesting Facts About Holi. Lets us know in the comment box about which activity do you like most when Holi like Throwing Gulal (Colour), Fighting With Water Guns, Eating Sweets & Gunjia, and etc. Also, If you love to share Happy Holi Images, Holi Wishes, Holi Quotes, Holi Gif, Holi Status, you can visit at HoliPictures.In.