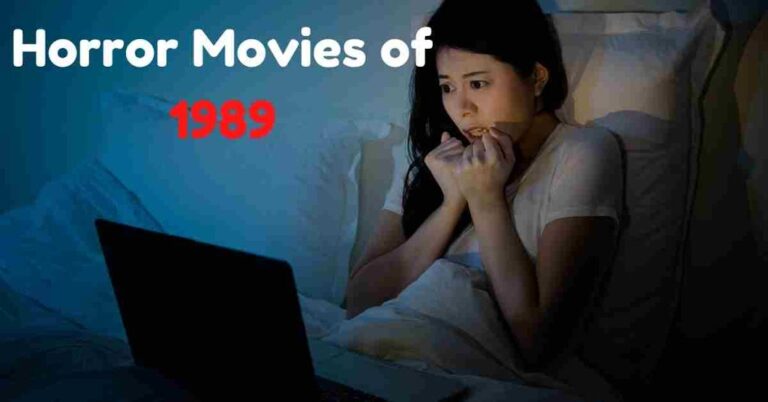 The year 1989 was not the most fun year to explore when it came to our beloved horror genre. Most of the big studio efforts came and went with little praise or attention and it seemed like all the big horror franchises either plummeted in quality or just stopped delivering sequels by the time this year arrived. Here is my list of the Top 10 Horror Movies from the year 1989.

This film is directed by first-timer Scott Spiegel and produced by his friend Sam Raimi, so as you would expect this film has a funny comedic twist to it. The entire thing takes place in a supermarket and they take full advantage of the setting to provide fun and gory murder set-pieces. It against all odds manages to feel fresh in a time where slasher films were kinda done for already. Spiegel would go on to continue working with Raimi over the years and has also been able to put out a few more directorial efforts, which does include the second From Dusk Till Dawn movie and the third Hostel film. I’ll say that I think Intruder is his best work as a director yet. The intruder is a film that should satisfy most slasher fans and although it doesn’t have anything groundbreaking to offer, it will be a nice addition to the collection for all fans of the genre.

At number nine we got a strange haunted house film from Japan with Sweet Home. The legacy of Sweet Home is perhaps felt more by its Famicom game which was released at the same time and it even shared the trailer together with the movie version. The game is said to be very influential in the survival horror game genre and is credited as a strong influence for the now legendary resident Evil franchise. The movie might not have had the same impact on cinema or the horror genre, but it is a fun film filled with lovely camera work and enjoyable special effects. The best way to describe Sweet Home would be to call it a mixture of Evil Dead 2 and Poltergeist, with a mix of Japanese madness to it of course. I should also note that writer and director Kiyoshi Kurosawa would go on to have a nice career after this film, and he delivered noteworthy entries in the J-Horror boom of the late 90’s early 2000’s with stuff like Cure and Pulse. And I should also not forget to mention that some of the effects were handled by none other than Academy Award-winning effects artist Dick Smith. If his name is not familiar then just know that he did the effects on The Exorcist.


Are you enjoying these Horror Movies of 1989?

At number eight we got a surprisingly enjoyable sequel with C.H.U.D. 2 – Bud the Chud! This is a sequel to the 1984 film C.H.U.D., a film I don’t really care all that much about, so I was pleasantly surprised at how much fun I had with Bud the Chud. This goes for the laughter and it sure got it from me. There were countless other zombie films in the ’80s that also went for comedy, but few manage to find that sweet spot that makes it work as a funny film without being insulting to the monsters they decided to use. I guess I might be in the minority of that opinion as it is criminally underrated on IMDB and LetterboxD, so be warned that there are others that do not share the same enthusiasm about Bud the Chud as I do, but if you happen to be one of the many who enjoy awesomely, funny 80’s horror comedies and have yet to experience C.H.U.D. 2 – Bud the Chud, then trust me on that it is worth checking out.

At number seven we get to enjoy Anthony Perkinsas the classic characters Dr. Jekyll and Mr. Hyde in the Edge of Sanity. I’m not the biggest fan of movies set in the1800’s, but Edge of Sanity is a wild one that could only have been created in the ’80s. This Jekyll and Hyde story sees our main guy hooked up on cocaine while he walks around in the streets looking for prostitutes to abuse. To see what I consider to be such a classy actor as Perkins accepts such an insane role makes this film unique as his performance is what makes the film as fun as it is. Edge of Sanity is an oddity that I am surprised I haven’t heard more of over the years. It’s not a great film, but the sheer insanity of it makes it a fun watch and I think especially fans of the Psycho movies will have lots of joy seeing Perkins as a drugged-up maniac in this atmospheric weird mixture of the 1800s and the ’80s by former porn director Gerard Kikoine. If all of this sounds like something you could find entertainment in, then make sure you check out Edge of Sanity.

At number six we have another film that was a first-time watch for me in preparation for this list with the horror-comedy cannibal film Parents. This film tells the story of little Michael, a young boy who is afraid of what is supposed to be the main backbone of his life – his parents. He is afraid that his mother and father are not only meat lovers, but in fact human meat lovers. The parents are made up of experienced actors Randy Quaid and Mary Beth Hurt, both delivering fun performances, especially Quaid who is the highlight of the film. Parents were actually a flop back in ’89, only making back about 1 million dollars on a 3 million dollar budget, and it hasn’t exactly gathered a big crowd of fans over the years as far as what I know, but perhaps and hopefully the 2017 BluRay release by Lionsgate has made more people aware of it. There definitely is a crowd out there that will love this film, so if anything about this sounds interesting to you, then pick up the BluRay and give Parents ago.

5. A Nightmare on Elm Street 5: The Dream Child.

Wouldn’t be a list like this without having Freddy Krueger pop up and unintentionally at number five we have A Nightmare on Elm Street Part 5: The Dream Child. This is not the most loved entry to the Freddy franchise and it definitely has its problems, but even so, there is still plenty of stuff to enjoy about it to make it deserve a respectable spot on this list. I love the dark visual look of the film and there is some top of the line special effects on full display in the Dream Child. Some of the new characters might not be all that great, but we still have Lisa Wilcox as Alice and of course the legend Robert Englund as Freddy Krueger. I can’t count on my hands how many times I’ve seen this one as the Nightmare series is my favorite horror franchise of all time and regardless of problems people might have with this film, I firmly believe that it delivers 90 minutes of awesome entertainment, so if you are lukewarm on this one and haven’t seen it in a while, then take my word for it and give a second chance to A Nightmare on Elm Street 5: The Dream Child.

Continuing on at number four we got Brian Yuzna’s Bride of Re-Animator. I had honestly forgotten just how much gory fun this sequel actually had as it had been years and years since the last time I had watched it. After rewatching it again now I wouldn’t be surprised if other fans would hold it as dear to their heart as the first Re-Animator as I think they are very close in quality. What this film does better, dare I say, is the pacing as it doesn’t need to take any time in setting things up like the original obviously had to. They throw you right into the fun stuff and before you know it, there’s entrails and organs being thrown at the screen for your enjoyment. Bride of Re-Animator is an excellent sequel to an icon entry of the 80’s horror genre and I’ll even say that it might be a bit underrated, so if it’s been a while for you, then pick up a nice looking BluRay and have yourself a blast with Bride of Re-Animator.

Coming in at the number three spot is the controversial killer clown film Clownhouse. This is a scary and fun film about a group of escaped inmates from an asylum that come across a circus where they kill off the real circus clowns, grab their outfits, paint up, and set their sights on terrorizing three young boys who are home alone without any parental guidance. What the movie is more known for now however is not being a scary little film, but rather the terrible events that took place behind the scenes. Even so, if you take Clownhouse on its own merit, if you are able to, then you will have a killer clown movie that is actually entertaining, atmospheric, and at times even scary.


Are you enjoying these Horror Movies of 1989?

In this, we see evil from medieval times being unleashed from the crypts of a church that was built on the cursed ground. Soavi is able to build a great atmosphere and keep it running throughout the entire movie. It’s obvious that he was in his creative prime and his dedication to making every single scene feel like it was done with care and attention is nothing less than impressive. Soavi takes full advantage of its gothic-looking church, it has a cool cast and I believe The Church is a film that every fan of Italian horror needs to have in their collection. But even more importantly, if you’ve never gotten around to it yet, then make sure you treat yourself to a night with The Church.

And here we go at number one, with what I consider to be the best horror film of 1989 and that honor goes to Pet Sematary. This adaptation is arguably one of the finest horror films based on a Stephen King story, at least it deserves to be up there amongst them. It is a film that deals with human emotions and how we deal with death and grief and it has moments that hit you right in your stomach and might make you question what you would do if you were in the position of the leading character Louis Reed. Pet Sematary has grown on me over the years and I seem to find more things to enjoy about it the older I get. The scary stuff works better and the emotional stuff gets me more and more. My gripes with the film are that I don’t care all that much for Dale Midkiff as Louis Creed, but other than that I gotta give it up to director Mary Lambert for her magnificent work on this film and it was without any question during the making of this list that Pet Semetary would rise to the top and be honored as my choice for the best horror movie of 1989. And that’s that.

My final list of the top 10 best horror movies from the glorious decade that was the 1980’s. Now I’m curious, what were your thoughts on this list, and which horror films did I miss that you feel deserves to be included in the top 10?

Have you enjoyed this list of top 10 Horror Movies of 1989, do let me know in the comment box?