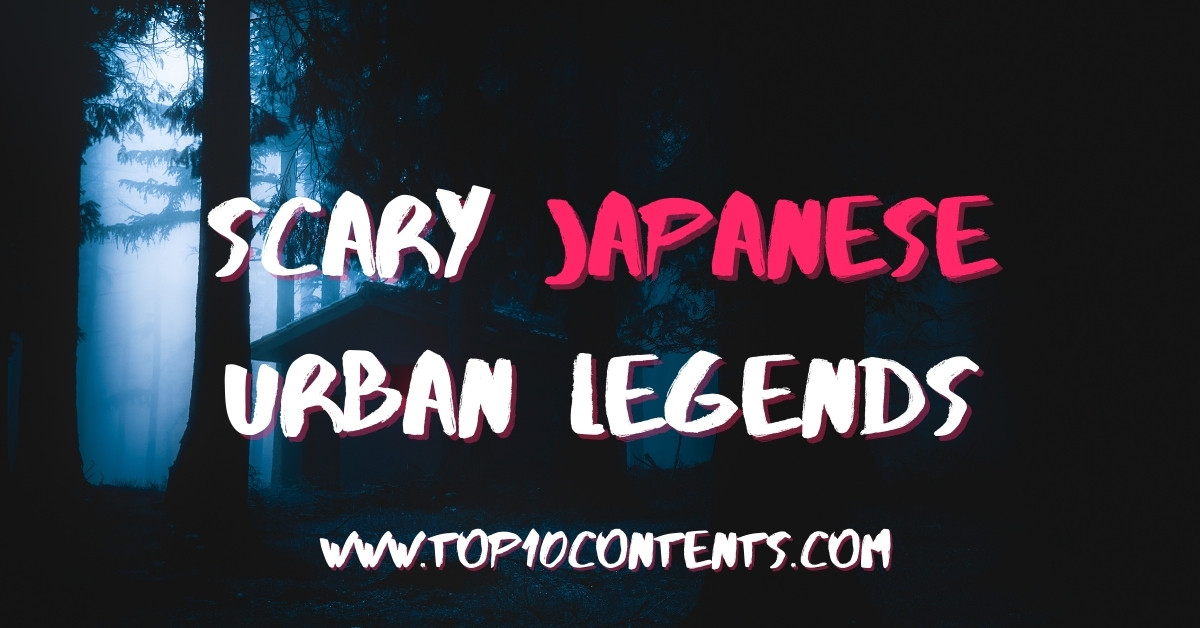 Welcome, guys to my blog. Today, I am going to tell you about the 10 scariest Japanese urban legends.

Knowing about these Japanese Urban Legends, you might start to fear Japan a little bit.

Trust me guys, when I researched about these scary legends, I once thought about staying away from Japan. These legends are the scariest legends I ever read.

Let’s start with Hachishakusama, Eight Feet Tall, I really don’t know what to call it.

Hachishakusama which means 8 feet tall. It is the soul of a woman who kidnaps young children and therefore is also called La Llorona of Japan. If this soul likes a child, then within a few days that child disappears or he dies suddenly. To deceive children, this soul takes the form of a relative of that child and calls those children in the voice of their relatives. Even after changing its form, this soul always appears only 8 feet tall.

Seeing the naive appearance of this doll, one cannot say that it is a cursed doll. It was given as a gift by a boy living in Japan to his younger sister. The name of that little girl was Okiku. She used to play with this doll every day. This doll had also worn a Japanese traditional dress ‘Kimono’.

KuneKune, also known as Cylinder Man of Japan. It is actually a thin white figure, which is always waving, and KuneKune is often seen waving near a large farm or a large pool of water. If this wavy shape is away from you, then you are not at any risk from it. Anyone who looks at it closely gets mad losing his mental balance. That is why people are advised to stay away from KuneKune. It does not harm you by keeping a distance from this wavy shape.

Nure Onna, which means a snake-like woman. It is also known as Snake Woman. Its body is like a snake and its face is like a beautiful woman. It has snake-like skin all over its body. It has two human hands which are equipped with sharp nails. It has long black hair on its human head and has two large snake-like teeth inside the mouth and a long tongue. But the most frightening thing is its two eyes.

It is said that whoever looks into the eyes of the snake woman is unable to move from a place to fear and becomes completely powerless. It is believed that the snake woman hovers in the shallow waters of the river and the sea in search of her human prey.

Whoever is swimming in the shallow waters of the river and the sea, then this snake woman suddenly comes to them and when they look in its eyes, they become powerless and cannot swim and then The snake woman drags them into the depths of the water and drinks all their body blood.

When the snake woman does not see people swimming in the water, she turns her head up and down in the water like a drowning woman to catch the attention of humans walking on the shore. Due to which people feel that a woman is drowning and they jump into the water to save her. But whoever falls in its trap, will never come out of the water again.

Aka Manto, it means red cap in English. It is a famous urban legend of Japan and according to this urban legend was a handsome young boy. He was assassinated in a public restroom, but his murderer was never caught. It is believed that the soul of this boy is still killing those who go alone in Japan’s public restrooms. Right now means this time or when you are reading this article.

There were many such incidents in the 1980s, in which many people who went to the public restrooms of Japan were either injured or killed. Those who survived were told a story.

According to the story, a soul suddenly appeared to people in public restrooms who went alone. According to witnesses, this soul had worn a red cap on the body and a golden mask on its face and this soul asks a question to each of its victims.

If you are not able to answer this question or if you choose a different color by using smartness, then this soul will drag you to the dark corners of hell.

If you want to survive, then you have to say “sorry but I don’t want any cap.”

It is also believed that you will see a terrible face when you look inside any mirror of your car while traveling through this tunnel and then you will die after 4 days.

The story is about a girl, Kashima Ryko, who was very shy in nature and her friends always make fun of her. One day Kashima along with her friends, after a school holiday, was standing near the railway tracks waiting for the train to pass. That’s when Kashima’s friends mockingly scare her. Due to sudden fear, Kashima fell on the railway track and at the same time a fast passing train broke Kashima’s body into two pieces and after seeing this terrible incident, everyone present there fled.

Despite having two pieces of the body in this accident, Kashima was alive for a long time and was calling people for help. But no one came to help her. She succumbed at last after suffering for a long time, and from the same day, Kashima’s soul wanders in the darkness of night on the streets of Japan.

According to a story, a boy was returning home from school in the evening. Then he saw a girl standing in the window of the ruined building on the side of the road and that girl was also looking at him. Then within moments, the girl jumped from the window and came on the road. Then the boy noticed that the body below that girl’s waist was missing and that girl was moving fast towards that boy using only her hands. After seeing this scary scene, the boy could not even move from his place in fear, and in the blink of an eye, Kashima cut the boy’s body into two pieces with the weapon she had. According to the people of Japan, when the soul of Kashima walks on his hands, the bones of her hands make such a sound as “Teke-Teke”.

Some people also believe that Kashima’s soul asks people a question before killing them. That question is ‘where is my leg?’ The correct answer to this question is “The Meishin Railway-Station”. But if you answer this question incorrectly, then it will also cut your body into two pieces.

Hitobashira was an old Japanese tradition. To strengthen the foundation of the palace, a healthy person was captured and sacrificed and his body was buried inside a palace wall. According to Japanese belief, the soul of that sacrificed person is used to protect the building from the dangers ahead.

There are many such palaces in Japan even today, in which sacrificed human bodies are buried, and one such palace, Matsu Palace. A beautiful dancer, whose soul is buried inside, still protects this palace.

But whenever a woman dances around Matsu Palace, this palace starts to tremble and that is why dancing is forbidden inside the premises of Matsu Palace.

This one is my most favorite legend and this really scares me.

This is the soul of a woman who asks you two questions, which you can answer in yes or no. But whatever the answer is, you will have to die. This urban legend is based on a story and this story is of Kuchisake Onna.

Kuchisake was a married woman who lived in a small village in Japan. Her husband was a samurai? Kuchisake was very beautiful, that’s why she was very famous in her village. But even after getting married, Kuchisake had relations with another man.

When Kuchisake’s husband came to know about this, he became very angry and he angrily attacked Kuchisake’s beautiful face with his sword. The blow of that sword was so strong that Kuchisake’s mouth was split in two.

Then Kuchisake’s husband asked her, “Tell me who will call you beautiful?” And after this shameful accident, Kuchisake committed suicide.

Unfortunately, this story does not end at this place. After about 800 years, Kuchisake’s soul returned. In the 1980s and 90s, many people encountered this evil spirit. And those who survived, They said that a woman wanders in the deserted streets of Japan wearing a mask and asks two questions to a lonely person.

Viewing her injured face if you answer “no”, she will kill you with the scissor she has and if your answer is “yes” by fear, then she will rip your face from ear to ear and leave you alive after that.

According to the people living in Japan, the spirit of Kuchisake is still haunting people in the deserted streets of Japan, by making them victims of her questions.

So, friends, these were Top 10 Scary Japanese Urban Legends. Which of these legends did you find scarier? Do tell me in the comment box.