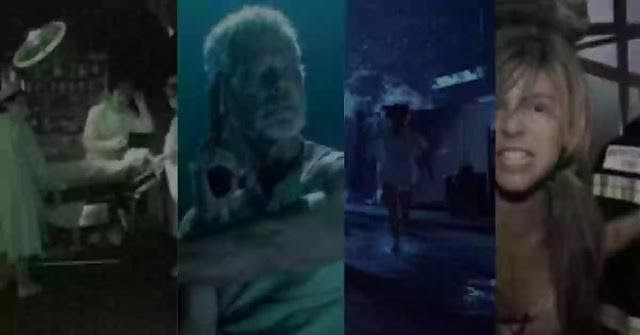 ‘Horror’ means the fear that comes to mind when you listen or watch or feel. I’m talking about Horror so basically, this article is about the 10 best horror movies of Hollywood that will scare you in nights into your dreams. Once you’ve seen these movies completely, I bet you will not dare to go to the toilet without your parents. Also, You can recommend these horror movies to all your so-called brave friends who think of themselves as very brave.

Grave Encounter which was released on September 9, 2011, is really such a very horror movie.  When you will watch it, you will only think that thanks to God, you never put me in such a situation. Yes, Friends, I am talking about a movie in which some people lock themselves inside an abandoned mental hospital for the shooting of a Ghost-Hunting Reality TV Show.
But soon, they come to know that the place they have come for their shoot is really a haunted place.
Because those people start disappearing one by one at that place and they also come to know that this hospital will not gonna leave them alive.
In that building, they are confronted by many spirits of several dead patients and they are trapped in a never-ending loop from which it becomes impossible to escape.
The director of this film ‘Grave Encounter’ is Colin Minihan and Stuart Ortiz and the main cast in the film are Ben Wilkinson, Sean Rogerson, and Ashleigh Gryzko.
This film had proved to be a hit and the total budget of the film was 1.2 lakhs USD and it earned 54 lakhs USD worldwide.
This movie is a must-watch movie from my side.
There is also the second part of this film. Grave Encounter 2
Category: Adventure, Fantasy, Horror
Grave Encounters Trailer: See here

REC film released on 23 November 2007,  is a Spanish horror movie. The story of this movie is around a young TV reporter and her cameraman (with some firefighters) reporting inside a building where they are confronted by an unknown horror force.
The film is like a live footage film. The entire story of this film is shot through a camera that you can see in the movie.
This movie is available in both Hindi and English languages.
The director of the REC film is Jaume Balagueró and Paco Plaza and the main cast in the film are Manuela Velasco, Ferran Terraza and Jorge-Yamam Serrano.
This film is also proved to be a hit on the box office and the film had a total budget of $ 2 million USD and grossed $ 32.5 million USD worldwide.
There is also a remake of this filmQuarantine.
Category: Action, Adventure, Horror
REC. Trailer: See here

A Nightmare on Elm Street, released on 16 November 1984, is not a movie but a series of many movies (1984-2010). This 1984 film is about a dangerous clawed killer devil Fred Krueger who scares you in your dreams and it is not that you are safe when you are out from your dreams. Now it is to be seen how this devil scares you, you will know about it by watching the movie.
This film was directed and written by Wes Craven and the main cast in the film are Heather Langenkamp, ​​Johnny Depp, and Robert Englund.
The film proved to be a hit and the total budget of this film was 18 lakhs USD and it earned 5.7 crores USD globally.
Category: Horror
A Nightmare On Elm Street Trailer: See here

In the 7th number, there is a tie-up between two movies.

Don’t Breath, released on 26 August 2016, is a crime, horror, and thriller movie. This movie is about three people who go to an old blind man house to rob him. But they misunderestimate the power of an old man and soon they realised this old man is not helpless as he seems.
Later, they find many secrets in that old man house.
This film was directed by Fede Alvarez and the main cast in the film are  Stephen Lang, Jane Levy and Dylan Minnette.
The film proved to be a hit and the total budget of this film was 99 lakhs USD and it earned 15.71 crores USD globally.
Category: Crime, Horror, Thriller
Don’t Breath Trailer: See here

Friends, if the danger is in front of us and it is visible to us, then we can save ourselves. But what if we could not see the danger.
An unknown force, which is not visible but due to its control, you can suicide.
This film was directed by  Susanne Bier and the main cast in the film are Sandra Bullock, Trevante Rhodes, and John Malkovich.
The total budget of this film was $19.8 million USD. This movie is seen by 45 million people on the streaming platform Netflix.
Category: Drama, Horror, Sci-Fi
Wrong Turn Trailer: See here

Friends, what if you are planning to have a picnic in a forest and going to the forest with your friends, but you don’t know there lived three crazy man-eaters whose foods you are, then what will be your situation.
This is the exact story of “Wrong Turn”, in which all these friends are confronted by these three cannibalistic mountain men with the appearance of monsters live in that forest.
Now it is to be seen whether these people will be escaped from these man-eaters or their end will be very bad.
This movie was released on 30 May 2003.
Wrong Turn series has 6 parts and the first two parts are Must Watch parts.
This film was directed by Rob Schmidt and the main cast in the film are  Eliza Dushku, Jeremy Sisto, and Emmanuelle Chriqui.
The estimated budget of this film was $12.6 million USD and it earned $28.6 USD globally.
Category: Horror
Wrong Turn Trailer: See here

What if you see a videotape and after which you get a call and you find that you are going to die in the next 7 days.
In this movie, a ghost comes out of the TV and kills you. To know about what is the secret behind this videotape, you will have to watch this movie?
The movie was released in the USA on 18 October 2002 and was a remake of a Japanese film called Ring.
The director of this movie is Gore Verbinski and the cast of this movie is Naomi Watts, Martin Henderson, and Brian Cox.
The estimated budget of this film was $ 48 million USD and it earned $ 249 million USD globally.
Category: Horror, Mystery
The Ring Trailer: See here

This world is filled with some dangerous creatures who are very sensitive to voice. There are any kind of voices and these creatures destroy that voice. If you make a sound, you are finished. So keep walking without making a noise and find a safe place to protect yourself.
In the story of this movie, a couple themselves and their children together finds out a shelter escaping from these creatures sensitive to the sound. But they do not have to make the sound in any way.
Now, it will interesting to see how they find a place for themselves and their children. Will they get shelter? or will they die from these creatures?
This movie was released on 6 April 2018.
The director of this movie is John Krasinski and the main cast of this movie is  Emily Blunt, John Krasinski, and Millicent Simmonds.
The estimated budget of this film was $ 17 million USD and it earned $ 340 million USD globally.
Category: Drama, Horror, Sci-Fi
A Quiet  Place Trailer: See here

A newly married couple, who shift to a suburban ‘starter’ tract house, but soon realize that there is someone in their new house who does not want them to stay in that house.
This evil force or devil, whatever it is, troubles them considerably, mostly at night.
So they set cameras in their house so that they can detect unusual things happening in their house.
At the beginning of this movie, it will surely bore you but as the movie progresses, your interest will also increase and you will then see all its parts very eagerly.
Yes, Paranormal activity has 6 parts.
This movie was released on 16 October 2009.
The director of this movie is Oren Peli and the main cast of this movie is  Katie Featherston, Micah Sloat, and Mark Fredrichs.
The estimated budget of this film was $ 15,000 USD and it earned $ 193 million USD globally.
Category: Horror, Mystery, Thriller
Paranormal Activity Trailer: See here

A couple calls famous paranormal investigators Ed and Lorraine Warren to investigate unusual activities happening in their farmhouse. The Lorraine discovers that the entire area is cursed by a Demonic power and it is now behind this family.
The movie is based on some true paranormal investigations by Ed and Lorraine Warren.
This movie was released on 19 July 2013.
The director of this movie is James Wan and the main cast of this movie is Patrick Wilson, Vera Farmiga, and Ron Livingston.
The estimated budget of this film was $ 20 million USD and it earned $ 319 million USD globally.
Category: Horror, Mystery, Thriller
The Conjuring Trailer: See here

This movie, which has won many awards, is a very Creepy movie, so it is advised not to watch it alone. There are so many terrible and disturbing scenes inside it that anyone can be mentally unstable.
A 12-year-old girl whose body is possessed by the demonic spirit of an old and lustful ghost and then turns that girl into a living corpse.
For her exorcism, two priests come, but that priests are not able to easily control that evil ghost.
It is to be seen whether that girl will be able to escape from that ghost?
This movie was released on 26 December 1973 and also won an Oscar.
This brilliant and very creepy movie is directed by William Friedkin and the writer and original writer of this movie are William Peter Blatty. The story of this movie is taken from William Peter Blatty’s novel.
The main star cast of this movie is Ellen Burstyn, Max von Sydow, Linda Blair, Kitty Winn, Jack MacGowran, Jason Miller and Linda Blair.
The movie had an estimated budget of $ 110 million USD and the movie grossed $ 441 million USD across the world.
Category: Horror
The Exorcist Trailer: See here
I have watched all these movies and trust me guys these movies are the best horror movies of Hollywood of all time and definitely will scare you. From my side, Grave Encounter is my favorite movie. This movie was so creepy that it had really made me frightened and even I had made a decision not to go to the toilet alone.
Thanks For Reading!