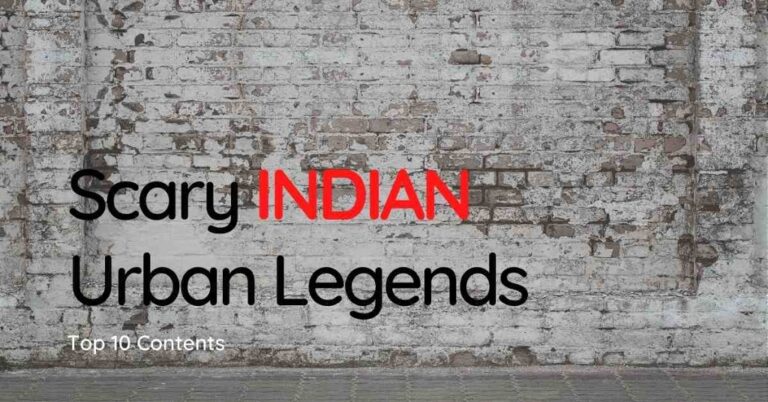 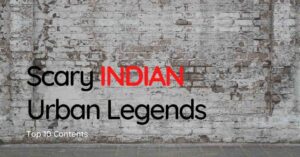 In 2002, the Indian state of Uttar Pradesh was gripped by a panicked frenzy. People had reported seeing the Munochwa – a beast that names roughly translates to The Face Scratcher. It would reportedly dash through the air at night like a UFO, emitting red and green beams of light. When it got close, it would slash their face with steel claws, leaving deep scratches that burnt and bled. As the panic continued, the theories began. Some said it was an angry spirit or an elemental creature. Pakistans intelligence agency even chipped in to suggest it was a chemically engineered insect. Whatever it was, people were so scared they held special ceremonies at their local temples to ward away The Face Scratcher – some believe it may return again.


Are you enjoying these Scary Indian Urban Legends! Let me know in the comment box.

In the 90s, there were reports of a witch visiting houses in Bangalore India. She would come at night, knocking on the door and calling out to the person inside. What’s creepy is she was said to use the voice of one of their relatives, especially their mothers. If they opened their door, they’d be dead within24 hours. As panic spread, rumours of a solution did too. Some said to write -Nale Ba- on the door. That means -come tomorrow- so the witch would see the sign and return the next day. For many years after, it this became a tradition- a way of warding off evil spirits. Some say that Nale Ba has been forgotten by the younger generation, who have now put themselves at risk of the witch returning again …

3.The Wolves of Pavagada.

In 1983, several girls younger than 5 went missing at night in the village of Pavagada. They were taken right under their parent’s noses but nobody saw who or what did it. On one occasion, villagers found a pool of blood and the clothes of the missing child. The footprints of an animal were visible and the police dogs tracked the sent back to a cave, its entrance blocked by a wall of bricks. The police claimed that man-eating wolves were on the prowl. Others were confused though, why would all the targets be girls – all of them the only daughters of their parents. Why were they always taken from their sleeping parents and why were there no drag parks on the ground? One father even reported the wolf threw stones at him. This led some locals to believe the children were actually taken by a cult of black magic practitioners who were using them as human sacrifices to the Goddess Kali. To this day, the case remains a mystery …

20 years ago a rumour began spreading around India that Ganesh idols everywhere were drinking milk. When people held a spoon or bowl of milk to the lips of the idols, the milk would slowly get depleted. In just a few hours, news had spread beyond India and Hundi temples in the UK, Canada and the US were reporting the same phenomenon. Hindu organisations announced that a miracle was happening. Some scientists have claimed it was caused by a mix of surface tension, the capillary effect and confirmation bias. What do you guys think?

That’s the name of a song by a popular Indiamusician back in 2006. It dominated the music charts for weeks but among all the hype, there were some darker stories attached to it. Some people said the song was attracting the dead. In the small village of Bhalej, locals claimed that one of the lyrics was acting as a call for ghosts. They said people were becoming possessed by evil spirits after hearing the song and were going to the local priest to be cured. It was also claimed that listening to the song in the local graveyard was practically inviting possession. In the end, fear of the song grew so much that the village actually banned the song – nobody was allowed to play it. Presumably, the possessions stopped – what do you guys think of that? Can a song on the radio be cursed?


Are you enjoying these Scary Indian Urban Legends! Let me know in the comment box.

In 2001 people in Delhi claimed that an ape-like monster was roaming the streets at night. It was said to be attacking people. Description of the Monkey Man differed but it was about four ft tall, covered in thick black hair, with a metal helmet, metal claws, glowing red eyes and 3 buttons on its chest. Many people reported being scratched and some even said 2 or 3 people died when leaping from the tops of buildings or stairwells ina panic. Its been years since the event but some people still claim the monkey man is out there and could attack another day…

Established in the 13th century, this used to be a prosperous Indian village for hundreds of years until the early 19th-century when everyone disappeared. Years later, some historians said this was due to a lack of water or heavy taxes on the people – but the legend is much darker. People say that the leader of the area was attracted to a beautiful girl from the village. He sent his guards to force the villagers to hand over the girl. The villagers asked the guards to return the next morning and while they were gone, they abandoned the whole village. The village chief then cursed the abandoned village for eternity, meaning anyone who lives there will die. Those who have dared to stay overnight have reported supernatural happenings such as shadows in the night, footprints and mysterious noises…

For many people, this is the Indian equivalent of the North American bigfoot. The Mande Burung is an ape-like creature said to inhabit the subtropical forests in Northeast India. Its been described as a large, hairy bipedal hominid. The locals call him the -Man of The Jungle-and say they’ve seen it for generations. More often though – they hear it – its strange calls echoing out across the rice paddies. Some say it stands 10ft tall and weighs over 600 pounds. In 2008, a group of yeti hunters gave two hairs they found to a renowned British primatologist. After examining them, Ian Redmond said they most closely resembled human, chimp, gorilla or other so-called-yeti hair- samples … but with or without science to back it up, the legend lives on…

In the forest of south Delhi, people have reported seeing a spectral woman in a white saree. She is said to walk among the banyan trees before disappearing. Some reports say they’ve seen her hanging from the trees and that this is what ended her life. One local said -she comes alive at night when those leaves start glowing. There are many such lovely spirits here- … personally, I wouldn’t use the term lovely to describe that. Shes also said to wave at you and then disappear. That’s a definite nope from me.

In 2005, reports of a witch visiting homes in Delhi was said to be linked to a number of deaths in the Indian capital. According to the rumours, a witch in the guise of a hungry woman rang peoples doorbell and asked for an onion. If she’s given the onion, she cuts it in half and blood squirts out. The onion donor then dies instantly, a moment after realising what has happened. Some say it wasn’t just 1 but rather 3 witches. Locals began applying palm prints of turmeric and henna on doors to ward off the witches and some still fear their return.