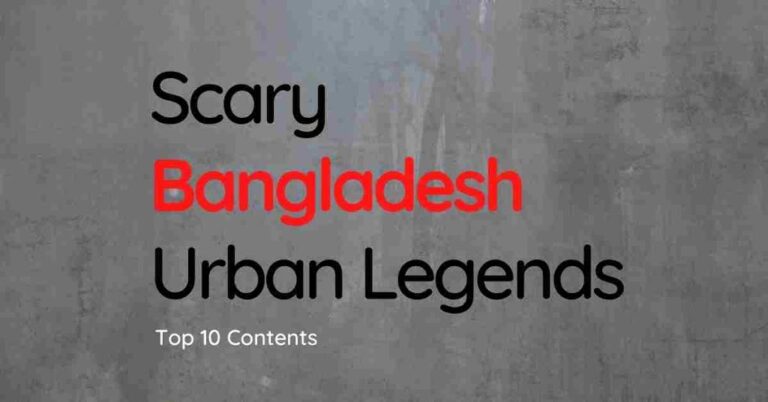 In Bengali culture, Urban Legend has it that evil spirits who have sold themselves to the devil will turn up to funerals with the intention of snatching the soul of the dead and dragging them to hell. For this reason, funerals are generally large with a lot of people in the procession, with extra pallbearers. The surplus is because first-round coffin carriers are said to fatigue quickly because of the extra weight caused by the evil spirits trying to fight to get into the coffin. Blimey.

9. The Odour of Banani Golf Height

Located in Dhaka, the Banani Golf course is right opposite a graveyard. Instead of focusing on their handicap, golfer shave reported being distracted by gruesome smells that mysteriously waft over the golf course. While some look for more scientific explanations, others swear the smell is accompanied by the sound of a baby crying. When the crying stops, the smell disappears. Who knows what is happening – it certainly is an unexplained mystery. Some people swear they see lights and orbs on the road by the course at night. Accounts differ, but most people who have visited the course report the smell.

Are you enjoying these Scary Bangladesh Urban Legends! Let me know in the comment box.

I love a good lake, I feel very peaceful and free by the water. However, Foy’s Lake is said to be one of the most haunted and terrifying spots in Bangladesh. The most popular legends involve two female spirits – one a black apparition, the other white. The black shadow is a nasty ghost that will attack passers as they walk over a bridge, whereas the white ghost is said to be kind and wishes to warn people. It is said that if a person sees the white ghost, they must thank her and turn back quickly as she is warning people about the presence of the evil spirit. On top of the legend of the two spirits, many people have reported seeing mysterious fireballs flying over the lake. Some people explain this as burning methane gas that has built up in the lake…which…err…sounds dangerous…others say it is the manifestation of the evil spirit.

7. The Cursed Gold of Kuakata Beach

Kuakata beach on the Bay of Bengal is well known for a legend that began being passed down through word of mouth in the 1980s. The rumor among the Rakhine people goes that a father and son from a nearby village went into a forest near the beach to collect wood for fuel and got thirsty, so decided to dig in the sand for water. As they dug, they came across something wooden. They dug deeper and found wood covered with golden embellishments, which they hacked off with machetes and pocketed. After uncovering what looked like the ruin of an old boat, the father and son decided to call it a day. They went home with their pockets filled with gold. Unfortunately, the males died in mysterious circumstances shortly after. The rumor goes that anyone who comes to across the boat wreck must leave it alone for fear of meeting the same fate as the digging pair.

Cyclone Sidr was one of the worst natural disasters in Bangladeshi recorded history. The category 5 storm in 2007 smashed through the Bay of Bengal, making landfall in many coastal towns and cities of Bangladesh. 3500 deaths were attributed to the storm, although the number could be as high as ten thousand. Not only were coastal districts of Bangladesh badly damaged, but a whole load of disease also came in the aftermath, with over 10 thousand people contracting Typhoid. Anyway, in the region of Koyra Khulna, there have been reports of the hundreds of people who died in the area haunting the town. This eerie phenomenon sounds very similar to the Japanese Tsunami ghosts, where dead people are said to climb into cabs without knowing they’re no longer alive.

Not only is the Dhaka Airport Road one of the biggest and busiest roads in Bangladesh, but it is also one of the oldest. The road has been subject to urban legends of hauntings for years, and one ghost, in particular, seems to regularly make the headlines. According to many eyewitnesses, in the early hours of the morning between Biman Office and Jasimuddin, a woman in white appears in the middle of the road and runs with superhuman speed towards cars. Some branches of the folklore say that has been haunting this place since the death of her and her family at a car crash along the road. It is thought that she wants to scar drivers into having accidents of their very own. This is how many people explain the high rate of accidents along the road.

In Dhanmondi, Dhaka, one apartment is at the center of a scary urban legend. It is said that an apartment block along the capital city’s road 27 was witness to a horrifying exorcism. Specifically, the apartment in question is on the second floor and has been vacant for years, setting tongues in the neighborhood wagging. Rumors about the mysterious house are varied. Some say that the strange occurrences that have taken place began after a woman in the building committed suicide. One contractor on the building said that he felt deep unease when working on the project and that building materials would fall over without cause. The Apartment is so spooky that often people turn up outside to video the exterior.

Are you enjoying these Scary Bangladesh Urban Legends! Let me know in the comment box.

3. The Dogs of Aliapur Village

I am compelled to sing who let the dogs out! But I won’t. Maybe I will! It is said that during each new moon, from 12 am to 3 am, a group of dark black dogs gather in a circle and bark at the moon. According to the villagers, the dogs appear to be the same breed and have blueish looking eyes and the gathering happens only every new moon, so around every 29.5 days. It seems the dogs have been turning up to bark and howl for years and when one older villager went to investigate, he was bitten. Urban legend has it that the dogs walk in sync, too. What could possibly be going on? Is this a Bengali Moaning Myrtle?

2. The Toilet Ghost of the Gazipur Garment Factory

In 2013, over 3,000 workers in Gazipur staged a huge walk out of a clothes factory when a female employee fell ill, claiming she was attacked by a spirit living in the women’s toilet. This was enough to convince the rest of the factory workers that the building was plagued by a vengeful spirit. The workers were spooked and refused to work until the spirit was removed. This resulted in mass riots, with some of the buildings being vandalized and tear gas used on protestors. A special prayer ceremony was held to rid the building of the toilet spirit before the workers would return to the factory. The incident of mass hysteria isn’t the only one of its kind in Bangladesh…poor factory conditions have led to similar instances of widespread belief in evil spirits possessing buildings. Are spirits choosing to haunt these sweatshops, or is there a more logical explanation?

JuJuJuju is said to be a creature that stalks the hilly area of Sylhet in Bangladesh. Originally known for its tea gardens and countryside beauty, these days people are afraid to venture out alone in case they run into Juju, a hairy bipedal creature that walks on two legs with terrifying red eyes. Many locals think that Juju eats babies and there are a number of first-hand accounts of the creature trying to attack infants. According to local legends, a woman who lived near the tea gardens went upstairs to check on her baby only to find the creature holding it in its mouth. Luckily she scared at away and It dropped the baby before it ran. Another story is circulated with a much less ideal ending, involving the creature sneaking into a home and eating a baby.