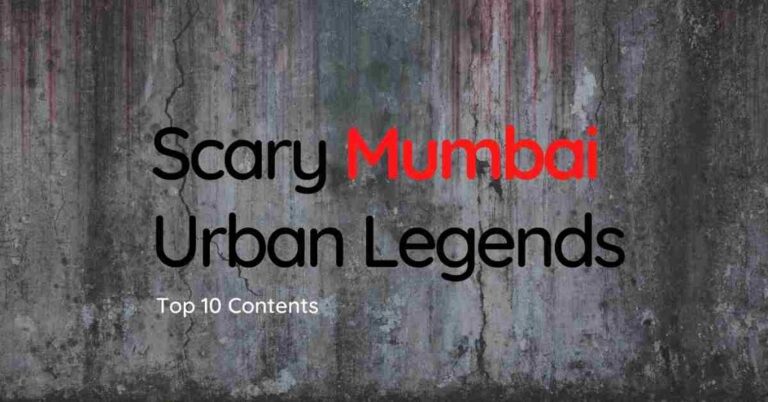 Near Thane Creek in the City of Mumbai is the Vrindavan Society – a well off area of the city. Perhaps the fact that there is an abandoned building in such a sort after the area is a reason for the rumors of a haunting…either way, the story goes that there is a slapping ghost on the loose. It is said that the night security guards are terrorized by a nocturnal ghoul! Rumour has it that if a security guard is slacking at any point or nods off while they are supposed to be working, they get a slap from a sassy specter. The ghost is said to be that of an old man who committed suicide in one of the buildings in the society…he clearly was concerned about building security and upkeep, even in the afterlife.

9. The Hitchhiker of Aarey Milk Colony.

Milk Colony… I don’t like those two words together – they are unsettling! Anyway, the imagery of milky bees aside, the Aarey Milk Colony is in Goregaon – a suburb of Mumbai and was set up in 1949 as a dairy farm, which it still is today. There are a few roads running through the but after dark, they are a pretty dangerous place to be. The thick Vegetation hides wild animals that have been known to set on people. For example, the area has seen a Leopard issue recently. There have been a number of grizzly murders along the road too – in 2016 a man was found headless. Stories are that there is a jilted female ghost that tries to get in people’s cars. If she is ignored, it is said she turns violent. This is how a lot of locals explain some of the more worrying goings-on here after dark.


Are you enjoying these Scary Mumbai Urban Legends! Let me know in the comment box.

8. The Man of Mahim Junction.

Spooky Urban Legends say that the owner of Mahim Station in Mumbai was burnt to death and now is haunting the station in a bid to avenge his murder. The rumor goes that anyone who visits the station after midnight is at risk of being subjected to his vengeance. According to local lore, 7 people have died as a result of the ghost at the station and local Mumbai commuters won’t go anywhere near this spot at night. Other variants on the ghosts story in this area agree that the location is haunted, but by a lady who fell down a nearby well. Sometimes urban legends turn out to be true…which makes me think that perhaps maybe all of them have a shred of truth in there. Anyway, weirdly enough… this one turned out to be legit…although you might not believe it when I say the headline!

7. The Blue Dogs of Mumbai.

So in 2017, the people of Mumbai thought they had started going mad when they spotted blue dogs and other wildlife running by in the area along the Kasadi River. It sounds impossible, right, Well… it turns out this one was true and the reason it happened was that a careless factory in the city was dumping untreated chemicals die into the river. This had an adverse effect on the stray wildlife living nearby, turning animals bright blue. See for yourself. It turns out when you see a blue dog on social media it isn’t always a hoax. We actually did a whole video about this on our news channel inform overload, so if you want to learn more about it then check it out there! Some vintage 2017 Rebecca Felgate hosting too.
Things have changed. This is another urban legend that turned out to be true, we have the much-discussed Donald Trump Billboard.

So an image online of a billboard of Donald Trump sitting in affluence with the words – There is Only One Way To Live – TheTrump Way – meanwhile underneath some impoverished Mumbai citizens were sleeping on the streets. At first, it was thought that the billboard image advertising a new Trump Tower circulated in 2016 was a hoax meant to spin some negative press at the President of the States, but it turns out the much-discussed billboard was legit. Photographer Paul Needham took high-resolution images from the same area to prove their authenticity. Let them eat brioche, right.

5. The Possession of Mukesh.

Mills has been abandoned since 1980 but was formally a working mill in Colaba. If you have a look at a few pictures from the dilapidated building you’ll easily see why so many people think the building is haunted…it looks pretty haunted, right? Well, that is exactly what a lot of location scouts for films thought, too. The location has been a popular spot for shooting horror movies and the like, however, these days it is said that actors and other film crew will refuse to work here based on some pretty freaky goings-on that occurred when one television actress was filming there. The story goes that two actresses were filming at the spot – one being famous Indian actress Kamya Punjabi, aka Sindoora Singh from the show Zee’s Banoo Main Teri Dulhann. She gave in an interview in which she discussed her first hand terrifying experience at the location – she said when she started shooting there items of hers started going missing but the icing on the cake was when a girl on the show she was in a scene with started acting like she was possessed and spoke ina man’s voice telling the cast and crew to leave the area immediately. Spooky! Kamya has vowed to never work in that location again.

If you go to Mumbai and ask locals about UFO sightings, some of them may have a lot of to say. It seems that a commercial air pilot, Mahima Chaudhary, called air traffic control in Mumbai in early October 2014 to report that she had spotted a green and white UFO at the height of 26 thousand and three hundred feet as she flew from Mumbai over Pune. This sighting came amid a flurry of UFO reports across India. Were UFOs coming for Mumbai, or was ita light reflection in the sky?


Are you enjoying these Scary Mumbai Urban Legends! Let me know in the comment box.

3. The Mystery of Divya Bharti.

Bollywood is a fabulous place where India’s glitz and glamour are at its finest. Sometimes, though, the bright lights, colors, and highlife draw in dark people with dark intentions. Some Bollywood stars have died under very suspicious circumstances, one of which was the bright young beauty, Divya Bharti. The rising star had just turned 19 when she dramatically fell from the Balcony of her 5th floor Tulsi Apartment Building in Versova, Mumbai in 1993. Even now, Divya is regarded is one of the most successful and highest-paid actresses in Bollywood History. She acted in over 14 films between 1992 and1993, which is an unbroken record in Hindi Cinema to date. Her death was ruled as accidental, however many many people, especially some Mumbai citizens, were not happy when the case was closed, unresolved. A lot of people suspect she was pushed, either by her husband or as a result of an underworld Indian Mafia. Scary. The mystery of her death is still very much that – a mystery.

Okay so I am unsurprised this place is the subject of Urban legends – The Malabar HillTower of Silence was a structure specifically built for dead bodies to be placed so that they can be eaten by vultures. So, yeah, this place ain’t no Disneyland. That being said, it might not sound great to you and me, but this process is part of the Parsi Community’s culture and marks a humans ascension to heaven..if nothing else, I guess I am all for the circle of life, I guess just having a place the dead bodies are chucked and eaten in a city is just a bit morbid for me. The Tower of Silence is still used by the Parsi community, and it isn’t really a place you want to be for many obvious reasons…and the smell. From afar you can see vultures circling the building, which is hidden among trees. The areas have generated a lot of rumors in its time which is understandable because of its sacred and spooky connotations. Just 200 meters away from Malabar and perhaps somehow connected.

1. The Curse of the Grand Paradi Towers.

I am not all about a high rise, but in a city, as populated as Mumbai, which is home to 18.41million people, I get that maybe city planners need to build skywards. One high rise you don’t want to live in, though, is the Grand Paradi Towers – a 28 storey residential tower in the central-southern section of the city. Why? Well, urban legend has it that they are cursed. Also, living in this part of the city is a pretty price. What is worse than a curse? An expensive curse. So, prior to 1998, the buildings built in1975 had seen a higher than usual spate of suicides from seemingly stable people. However, when three generations of the Dalal family jumped together off their eighth-floor balcony, ending their lives residents started to get nervous. A lot of people will now avoid the towers– which many locals claim is haunted. Ghosts aside – why exactly have so many people killed themselves here? Well, some think it has something to do with the nearby Tower of Silence, that can be seen by the Towers. Some people think the negativity of the death building is somehow infecting Tower dwellers.