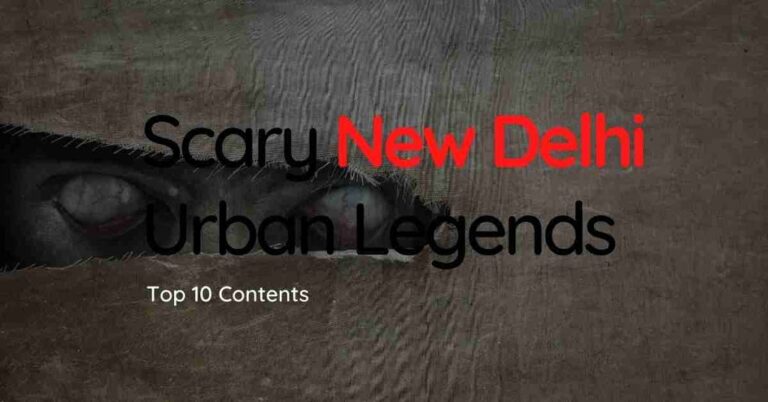 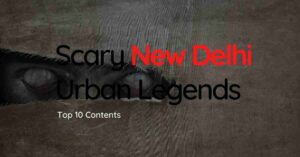 Legend says this was built by the legendary king Agrasen. It is an old, traditional stepped well with3 levels and 103 steps. Many people consider it the most haunted place in Delhi. Visitors report a dark feeling washing over them when they stare down the levels into the water below. For many years, locals warned of the blackwater that is found at the bottom of the well – they say it has powers – that it has the ability to hypnotize people and lure them over the edge where they fall to their death. Some say that spirits live in the well, perhaps responsible for drawing people to their deaths – or maybe they are the spirits of those who have already died. The place is closed to the public at night, but that hasn’t stopped some dark tourists from wanting to climb the walls and see for themselves if the suicidal pull of the well below …

What a great name. In 2005, parts of Delhi were in a panic when a witch was said to be prowling the streets at night – and she was thirsty for blood. The witch, or sometimes 3 of them, were turning up at people’s doors and ask them for onion. A strange request but one that most people were obliging, especially given how creepy they were. A housemaid experienced this and say -When you give her an onion, she cuts it in half, and blood starts dripping. Then you die instantly- … another witness said -She is an evil soul. She can disguise herself as someone you knew-… as you’d expect, with stories like this – people were scared and wanted to defend themselves. They said that only a palm print in Tumericor Henna on the door can ward off the evil witch. Because of this, it wasn’t uncommon to see yellow handprints on houses all over the city. Although the rumors have died down in the years since then, some still say the onion witch stalks the streets, waiting for a gap in people’s defenses…

Are you enjoying these Scary New Delhi Urban Legends! Let me know in the comment box.

In Delhi Cantt, locals talk of a mysterious woman in white. They say she is seen at night, wrapped ina white saree, trying to hitchhike with any drivers who pass through. Those who have heard the stories will know not to stop and give her a lift, for she is not of this world. She waves at people to catch her ride but those who stop are never seen again. Even if people don’t stop, they say she runs after the vehicle at inhumane speeds, matching the speed of the car until the driver has left the area, at which point she disappears into thin air. Then, there are the people who actually stop and ask her for directions – they say those people are then unable to find their way home for the entire night, going in circles around the city, completely lost until morning. There are a few theories about who this spirit was in life. Some say her life ended tragically, that on the last night of her life, she asked some men for a lift to somewhere else in the city – they raped and beat her in a moving car and then dumped her body at Delhi Cantt. Ever since that night, her vengeful spirit has been stuck in a death loop, asking for a lift and repeating the events of her death each night.

Jamali was the alias of Shaikh Jamali Kamboh, a saint from the pre-Mughal era. Kamali was an unknown person buried next to Jamali. Their tomb has become the focus of a number of paranormal stories over the years. Shiladitya was a Delhi University student who once went to explore the area with his friends. He said -I have heard that one gets to hear screams and slaps of angry spirits at Jamali Kamali- … a jogger in the park said -After moving to Delhi, my brother used to jog here with me. One day, he was alone and while crossing JamaliKamali, he felt a pat on his back. He stopped coming after that …- although that sounds pretty creepy, from what I’ve heard, he got off lucky. Other people have reported being fully slapped on the back, only to turn around and see nothing there at all …

In 1995, it was reported that statues of Lord Ganesha were drinking milk in Hindu Temples. It all started when a worshipper in Delhi held a spoonful of milk close to the trunk of the idol and was amazed to see it disappear. The news spread across the country as many people began to report the same thing in their own temples. From there, it spread around the world. Before long, temples in the UK, Canada, and the US were reporting the same phenomenon. Many Hindu organizations announced the miracle was happening, made by the will of Lord Ganesh. Some scientists have claimed that the reasons were not spiritual but could be explained by science. They said the milk-drinking was caused by a mix of surface tension, the capillary effect and confirmation bias. Others disagree and say this miracle could happen again – what do you guys think?

Built-in 1354, this structure used to be the headquarters of a dynasty that ruled over north India. In the centuries since its power dimmed into an eerie silence – locals say that spirits now live among the many dark alleys and ruins there. This belief is so ingrained that every Thursday, locals can be seen lighting candles and incense sticks in the darkest spots of the fort. There that lay offerings of milk and grain to appease the spirits, hoping that they grant their wishes. As this tradition spread and became more popular, it seems to have had an inverse effect. It’s said that these spirits stay in areas without many people around and naturally seek out darkness. The ever increasing visitors are said to have driven them away – perhaps into even darker parts of the surrounding area…

They call this place the Haunted Forest of Delhi. In a crowded city, it is eerily quiet. Some say this park is actually an abandoned graveyard that was used in ancient times. Despite its size, the park is relatively empty. Over the years, deep superstitions have developed about the forest – with locals swearing it is haunted. Of all of the creepy tales of spirits rising up from the graves – one stands out – the Saree Woman. People have seen her standing by the side of the road that goes through the forest. She is said to walk among the banyan trees before disappearing. Some reports say they’ve seen her hanging from the trees. This is actually how they say she died, hanging from the very same trees to end her life. In an interview, one local said -she comes alive at night when those leaves start glowing. There are many such lovely spirits here- … Yeah, he described her as lovely. I mean, I’m glad people can see spirits hanging from trees and think, that’s lovely, but I think I’d take the long way around the park if I saw that …

Are you enjoying these Scary New Delhi Urban Legends! Let me know in the comment box.

In 2001, the Monkey Man was the talk of the town. He was said to be a hair hominid creature that stood about 5ft tall and jumped between buildings. Eventually, he began attacking people in their apartment blocks – enough people saw him that a description began to be built up. Eyewitness accounts tended to describe the creature as wearing a metal helmet, which metal claws, glowing red eyes, and 3 buttons on its chest. Many people reported being scratched and a few people even died when they leaped from the tops of buildings or fell down stairwells in the panic brought on by the sighting of the creature. Although it been a fair few years since these bizarre events, some say the monkey man is still out there, he’s just got a lot better at hiding …

That name directly translates to -Bloody River-so you already know what you’re getting into. The small stream flows in west Delhi near the Rohini district. Locals believe it is haunted after years of unusual happenings and mysterious incidents there. People rarely go near the water, and only if they have to. Legend says that if anybody touches the water, the stream will suck that person in instantly. Locals say it happened several times in the past however, people are divided on what makes the stream haunted. Some say that spirits have always lived in the water there, dragging people to their deaths. Others say that in the past, the stream was a popular suicide spot and that the evil in the water is actually spirits of the dead who have returned as a ghost. Residents also claim that they hear the sounds of screaming and crying near the stream after dark, whatever the reason for this, many people simply choose to find another crossing …

Were gonna finish on a more modern one here – In September 2014, lawyers working at Karkardooma District Court returned to work one morning to find all the computers switch on. When this kept happening every day, CCTV footage was review. To everyone’s shock, the computers were switching on by themselves, sometimes even when they were unplugged. Some lawyers began leaving the chambers and refusing the enter the library at times. Legend says that the spirit of a lawyer haunts the building. They say he lost his life in the floods of 2012. Many believe that it is his spirit that causes chaos in the building. Paranormal investigators have visited the site numerous times, and even claim to have taken a photograph outside the deceased lawyer’s chamber that reportedly shows an apparition that resembled him. What do you think? Would you go to work or school if this kept happening?